I’ve been digging on California Wives since we first heard them this summer. On January 25, 2013 I finally got a chance to check them out at the High Noon Saloon as part of FRZN Fest in Madison, Wisconsin. Playing a bulk of their album, Art History, California Wives evoke the 80s without being kitsch. Their sound is firmly planted in the present but one immediately knows the familiar landscape of the band’s upbringing.

Art History‘s songs are well-crafted, but they take on a new urgency and depth live. “Better Home” was the set’s apex, crashing relentlessly over the crowd during the song’s last two minutes. The band smartly reserved their self-proclaimed danciest songs for the end, knocking out “Marianne”, “Purple”, and “Blood Red Youth” in quick succession. Combined with charming banter and visual panache, California Wives gave one of the most solid performances I’ve seen in awhile.

Click on any of the photos below to see more pictures of California Wives, or click here.

I know I’ve said it many times already, but another affirmation won’t hurt: Night Moves is one of my favorite bands to see live. Last week we featured a video mixtape from bassist Micky Alfano before their show in Madison, Wisconsin at the High Noon Saloon on January 24, 2013 for FRZN Fest and then caught up with the band that night. Their performance was one of the tightest I’ve seen by them – they’ve settled into a well-worn groove of a band whose members are comfortable with each other. Be sure to catch them on tour and let us know what you think!

“It began here; it could end here. I can think of worse places to die.”

As rain poured down on the crowd at Pondamonium 2012, hosted by the Madison Mallards at their Duck Pond stadium on August 9th, 2012, Garbage’s Shirley Manson joked about slipping and breaking her neck. Storming throughout the day, the rain held itself off in the early evening only to open in a downpour within minutes of Garbage starting their set.

After seven years away, the band sounds re-energized and as good as ever. I had first seen them in 2005 at the Orpheum, but my love for them began ten years before with the release of their self-titled debut. I lived in a small town outside of Madison, which as a sixth-grader felt much farther away than the seventeen miles that separated my home from Garbage’s. Even as a sixth-grader I was music-obsessed, watching MTV every chance I got and listening to the now-defunct 92.1 WMAD.

The first time I saw the music video for “Only Happy When It Rains” I fell totally and completely in love with the band (further detailed here) and that head-over-heels feeling hasn’t really subsided. While shooting the band in the photo pit at Pondamonium I was the one singing along when not grinning ear-to-ear or staring slack-jawed at the idol of my teen years.

For their homecoming, Garbage played an ideal set: a fair amount of new songs bolstered by the best of their previous releases (including, much to my friend’s and my delight, “#1 Crush” off the Romeo & Juliet soundtrack). I was impressed with how undated their songs remain – no one sounds like Garbage and they don’t sound like anyone else, yet their sound continues to evolve. The first time I heard their new album’s lead single “Blood for Poppies” was by catching an instrumental bit while using the scan feature on my car radio. Within seconds I knew it was Garbage. The new material sounded polished and melded nicely into the band’s catalog – none of the awkward ‘waiting for the new song(s) to be over so they’ll get back to the hits’ that sometimes happens when an established act comes back after a long hiatus.

Nearly as entertaining as the music was the band’s love affair with Madison and the fans. Said Manson, “I didn’t go to school here. I didn’t fall in love here. Oh, yes I did. Oopsie!” She then proceeded to offer up each member of the band, forcing them to say a few words about the occasion. Drummer Butch Vig offered gratitude for the career-spanning support he’s found here, from his bands Spooner and  The Know-It-All Boyfriends to his and guitarist Steve Marker’s Smart Studios. Marker also offered thanks, and hometown fixture Duke Erikson expressed more through the look of joy on his face while performing than with the kind he words he shared at Manson’s insistence.

Regardless of where Erikson, Marker, Vig, and Manson take up residence, the Pondamonium show made one thing clear: Madison will always be Garbage’s home. 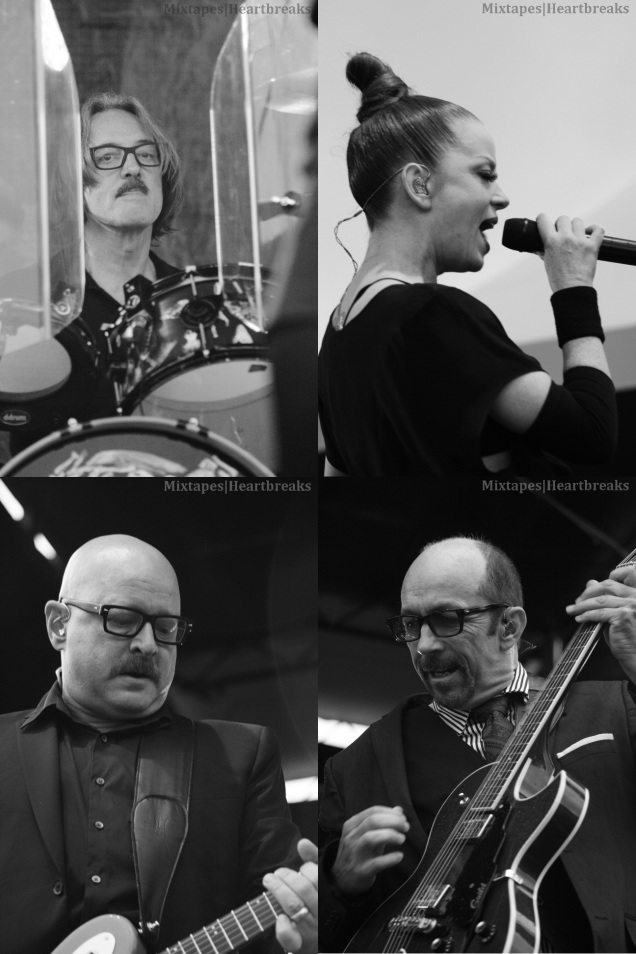 Check out more photos from Garbage’s set here. | Next up: The Flaming Lips at Pondamonium 2012